The Christmas Panto according to Reigate Dance Centre

Pupils from Reigate Dance Centre and the Reigate School of Ballet & Performing Arts have performed in numerous panto locally as they offer a great opportunity to perform on stage alongside professional actors, singers and dancers. But how did it all start and is it quintessentially English?

Panto originated from Italian street theatre of the Commedia delle 'arte, an art form using dialogue (much of which was improvised) and colourful characters in the 16th Century. In the late 1660s, John Rich, one of the most influential theatrical impresarios of the time, brought the art form to England. The main character was a magician, who was an acrobatic Harlequin based on the Commedia delle 'arte's Arlecchino.

By the Victorian period, the art form had become extremely popular on our shores, and especially at Christmas. By now, additional comedy and popular songs were added which gave greater variety for the audience and saw the popularity of music hall rise, while the more traditional Harlequinades became less popular. Augustus Harris was a huge influence on the rise of panto, leading to huge set designs and set changes and shaped the format for future pantomimes. Role reversal was common, where the man becomes the female main character (the Dame), and the woman becomes the Principal Boy, and of course the villain, who everybody portrays their distaste by "booing".

The pantos of today have moved with the times and now introduce popular television stars to raise the profile. Audiences could see well-known actors and TV faces in different scenarios than they would usually, which added to the humour. Well known scripts and stories such as Aladdin, Cinderella and Sleeping Beauty were adapted to everyday and current topics.

Many of Reigate Dance Centre's children have been singing and dancing in many productions as they offer an avenue to gain theatrical experience, which is important for their stage presence. Our pupils have currently been in many outside productions including venues in Redhill, Dorking and Leatherhead.

Whether you like them or not, for some people, panto is an ideal introduction to the modern theatre for children, and they are performed in halls and professional theatres alike up and down the country. Just remember not to "boo" or "hiss" in other forms of theatre - different formats / different etiquette. 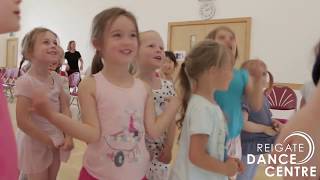